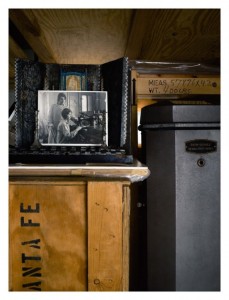 Through new works of video, audio, and photography rooted in The Wolfsonian’s extensive collection of materials depicting work and working figures, Describing Labor interrogates our relationship to the labor that forges the physical world. Internationally recognized for projects that address the most pressing challenges of collective memory, political identity, and historical space, Shalev-Gerz conceived Describing Labor following her 2011 residency at the museum.

Once the heroic image of class-consciousness and national character, pictured widely in the period of the Russian Revolution, the Great Depression, and the two World Wars, the worker has since receded from foreground of the contemporary visual landscape. “I realized that this was more or less the last time in our recent history that images of workers conveyed a sense of heroism. Since the end of the period represented in the collection (1885–1945), the image of the worker fell out of favor as a subject for the arts,” says Shalev-Gerz. “It made me think about how we do not know the faces of the people who create the things that surround us. We know other faces—politicians, celebrities, criminals—but not the worker, the one who makes. The lines, curves, shapes, and volumes of the items in the collection give image to the interests, passions, and quests of an epoch and those who produced it.”

For Describing Labor, Shalev-Gerz gathered forty-one objects that depict the figure of the laborer— paintings, prints, sculptures, photographs, and rare publications—the majority drawn from The Wolfsonian’s collection. She invited twenty-four participants to select an item and describe its depiction while she filmed them, “letting the image talk through them,” she explains. Participants were also filmedwhile listening to a voice recording of museum founder Mitchell Wolfson, Jr. reading research material about the object. Shalev-Gerz then asked each participant to place the selected work in the museum’s storage racks, where she photographed its representation of labor in situ with other products of labor, such as furniture suites, decorative arts, and industrial objects from The Wolfsonian’s collection.